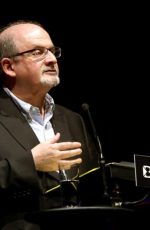 Salman Rushdie, whose Quichotte was shortlisted for the 2019 Booker Prize, discusses his Don Quixote spin-off and the geopolitics that inspired it – and he reveals to Rasika Sittamparam that while he may not like Batman, he does admire one crusading hero…

The main character in Quichotte is an American-Indian with a name inspired by Cervantes’ delusional knight. It’s a tragedy. Are you pessimistic about the future?

Pessimism is not my nature. I think I’ve always been hopeful and optimistic in my way of looking at the world. What I created in Quichotte was an enormous crackpot exaggeration of that. So here’s this old geezer, from nowhere, who decides that this extraordinarily beautiful, powerful, wealthy, successful, famous young woman is going to be his. And there’s absolutely no reason in the world to believe that that’s going to be true. And yet, he never gives up. He says: ‘Love will find a way.’ He’s hopeful and optimistic all the way through the book, and what I felt was that I wanted to take that optimism – which, yes, is also my optimism – and propel that across an American landscape, which may have much darker elements.

What role does fiction plays in the ‘post-truth’ era?

Literature has historically always been the place where people have gone to find the truth. It was true in the days of the Soviet Union, it’s true now in all literatures which come from oppressive countries. Maybe in a moment in which so many people are telling lies, it’s more important than ever to tell the truth. People have become very disbelieving of what is offered up to them as information and are very sceptical about it. That can be a healthy thing, to distrust what people try to push down your throats, but it can also be an unhealthy thing because it can lead you towards the incredulous. And we’re somewhere in the middle of that. When the world becomes as weird as this, I think fiction has to decide how weird it needs to be in order to make a true portrait of that world. This book is pretty weird, but that’s because the reality it is describing is, as they say, stranger than fiction.

You were born in Mumbai, lived in London, and moved to New York. Do you feel at home in America?

Your book has caricatures of the super-rich. What do you think of the wealthy?

Now, certainly in America, the accumulation of wealth is at some absolutely spectacular levels which far exceed anything that has happened in history. Figures show that the richest six or seven people in America have controlled as much wealth as 50 per cent of the population, or more. I can’t believe that that’s a healthy thing in a society – that extravagant, uncontrolled accumulation of wealth in very, very, very few hands.

The history in America is one with so-called robber barons, who may well have accumulated wealth by all sorts of nefarious things like, say, building railroads in developing countries. In those days, the accumulations of wealth were nothing as compared to what is true in the present day. We live in a world in which extreme wealth actually runs a place more effectively than politicians do. Jeff Bezos, and whoever is running Google these days, are probably more powerful than presidents!

Trump would love to be one of those guys, it’s just that he doesn’t have nearly enough money, which is why he doesn’t want us to see his tax returns. They will show us how little money he really has.

Do you think Donald Trump will be re-elected in 2020?

There are beginning to be indications that the Trump experiment may have been an aberration rather than the new normal. Certainly at the moment, if you believe in opinion polls – which I think people increasingly don’t – all the three leading Democratic candidates would perform very handsomely in an election. The margin of victory will be very small, the effects of it will be very large. But actually, Trump’s victory itself was by a very small margin, even if you set aside the fact that he lost the popular vote by three million. The three northern industrial states which he won, he won by combined majority of 75,000. That requires very, very few people to change their minds in order to reverse it.

Where do you stand on philanthropy?

I’m sort of divided about it. There’s a larger philanthropy that has benefited cultural organisations – I don’t deny the value of that. Any arts organisation in the world would tell you that it more or less depends on that kind of philanthropic intervention. Sometimes it feels like an attempt to change the subject. The fact that the Koch brothers put all this money into the Lincoln Center [in Manhattan] and have their names on some of its main buildings is all very nice, but it doesn’t disguise in my mind what the Koch brothers have been up to in America in the last 20 years. Yes, philanthropy can be used as a smokescreen or as a way of buying legitimacy, but one can’t deny that on the other side of that there are real benefits that have accrued from philanthropic instincts. It’s a complicated question, I don’t have a simple answer to it.

Quichotte revolves around the opioid crisis in America. What drew you to this subject?

Twelve years ago my youngest sister aged only 45, had a sudden heart attack and died. And it became clear in the aftermath that she had been heavily dependent on these very powerful opioids – Oxy, Percocet and Vicodin, to name a few. I was very shocked because I had had no idea that she was that dependent. It made the subject personal to me and it made me think that I have to dig into this business and find out what’s going on. For parts of the last 12 years I’ve been looking into this subject.

I didn’t predict OxyContin’s fall. I hoped for it – I hoped that people like the Sacklers would get their comeuppance one of these days. But, the more important thing is to ask oneself why so many people, so many communities, have felt the need for these powerful painkillers. It seems to be the answer that they treat a different kind of pain: loneliness, isolation and the pain of the heart. Somehow, in this culture we’ve made, in which theoretically we have a million ways now of being in touch with each other, many of us are much lonelier, more isolated than ever. I think the OxyContin epidemic is, in a way, a symptom of that loneliness. I wanted to think about that and explore it.

Even my character Quichotte, who’s not an addict, is a lonely man. He’s never married, he doesn’t have a child, and he’s desperate for one and eventually wills one into being. That kind of sense of being alone in the world, with nobody to depend on, is I think a feeling that many people can relate to nowadays.

Are you on a quest like your character, Quichotte?

I’m not on a quest, no, but I’d like my books to endure. If you’re my kind of writer, you’re interested in writing books that will have long lives that will hopefully outlast their author. What I feel a degree of pride in is that some of the early books, like Midnight’s Children, which came out almost 40 years ago, is still alive and of interest, even to those who were not born when it came out. The fact that it’s managed to move into a next generation, maybe even the third generation – that feels like something I can take pride in. I’d hope that it might happen with some of the other books. I would just like to be behind some books that people find valuable, enjoyable, and give them worlds that they’d like to inhabit. That’s what you hope to do.

Who are your heroes?

I think of ordinary people as heroes, I think of people who run into burning buildings to save people, doctors and nurses as heroes. I don’t think of superheroes, which are one of the mistakes of our time, because if that’s what you’re looking for, then that does lead towards authoritarianism. I’d rather have an honest fireman than Batman any day of the week. If anybody right now deserves to be called a hero, it’s this 16-year-old girl Greta Thunberg. There’s this extraordinary girl, who has in the course of one year galvanised a global movement to energise young people to protest about climate change. It’s the most astonishing achievement at her age. She’s a person I’d been following, all the times she has appeared in the news, and I’ve been listening to her. She’s enormously impressive – if you want a hero, there’s one.