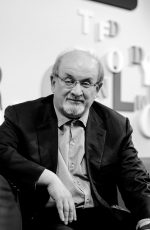 Salman Rushdie on Corruption and the Opioid Crisis

In Conversation with Deborah Treisman

Your story in this week’s issue, “The Little King,” revolves around the life of an Indian-American pharmaceutical billionaire, who attains that status first by inventing a dangerous, fast-acting opioid spray and then by insuring—through bribes paid to doctors and others—that millions of people become addicted to it. You mentioned that Dr. R. K. Smile’s trajectory was inspired by that of John Kapoor, the founder of Insys Therapeutics: what made you want to reimagine Kapoor’s life?

The Insys story gave me a starting point for a wider exploration. As I researched that story, it struck me that it wasn’t just about Kapoor but about the ease with which the medical system can be corrupted. It seems that corruption (see below) is not exclusive to Indian culture. And, in the end, that corruption brings Smile’s erstwhile employee and poor relation Quichotte (see below, again) face to face with the crucial matter of right and wrong.

What do you think this kind of topicality brings to fiction?

It’s useful only if it provides one with a good story and rich characters, and in this case I thought it offered me both. Over time, the topicality fades, so if the work is to endure, it will do so only because of those literary values.

Your corrupt pharma giant is called Dr. Smile; his wife is named Happy. What was behind your choice of names?

Dr. Smile delivers a speech in defense of corruption, which he views as a form of efficiency—applying grease to squeaky wheels. He bases his defense on his experience of overcoming the Kafkaesque bureaucratic challenges of life in India. Do you think he has a point?

I remember an Indian journalist friend once going on a rant about how corruption was the only antidote to terrorism. He said, “Just sit those guys down, open the checkbook, and ask, ‘How many zeroes?’ ” And anyone who knows India knows that financial grease, as you put it, needs to be applied to many wheels. So Dr. Smile’s defense of corruption is that it is a part of his culture. I hope it’s needless to say that I don’t agree with him.

“The Little King” is adapted from your forthcoming novel, “Quichotte,” which centers on Dr. R. K. Smile’s cousin Quichotte, who makes a couple of appearances here. Can you explain how Quichotte and his gallant quest came to be at the heart of the book (along with various other narrative and/or metafictional layers)?

The novel began with Quichotte, who was my way into a panoramic “road novel” that would look at the madness of the present time. Quichotte is deranged by his constant exposure to the junk culture of today, just as his antecedent, Don Quixote, was made crazy by the junk culture of his time. Also, Quichotte’s pursuit of the TV personality Miss Salma R., a total stranger, seems less gallant than Quixote’s passion for his Dulcinea; so I was writing about a kind of derangement of love as well. It often happens to me, however, that different narrative strands I’ve been thinking about suddenly coalesce into a single work. I had been contemplating this contemporary picaresque satire with a rather noble old duffer at its center, and, quite separately, I had been thinking about the opioid crisis, and then I saw how the two stories could merge. In the end—in another bitter irony—it’s opioids that open the pathway to the fulfillment of Quichotte’s dream.

Quichotte, in the novel, is a sort of what-if doppelgänger for “the Author” of his story. Are both figures, in a way, imaginary alternates for you?

Well, neither of them is at all like me, except that we are roughly the same age and share an origin story in a particular little neighborhood of Bombay/Mumbai. I hope I’m less of a goof than Quichotte. I can’t say if I’m a better writer than his Author, especially as I authored the Author’s authorings. Both characters have problems with their sisters and sons. I’m very close to my sister and both my sons. So they are, as we say in the trade, fictional.

Deborah Treisman is The New Yorker’s fiction editor and the host of its Fiction Podcast.