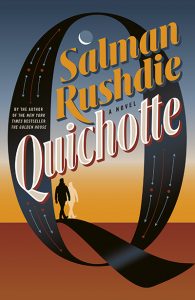 SHORTLISTED FOR THE MAN BOOKER PRIZE • “Lovely, unsentimental, heart-affirming . . . a remembrance of what holds our human lives in some equilibrium—a way of feeling and a way of telling. Love and language.”—Jeanette Winterson, The New York Times Book Review

Inspired by the Cervantes classic, Sam DuChamp, mediocre writer of spy thrillers, creates Quichotte, a courtly, addled salesman obsessed with television who falls in impossible love with a TV star. Together with his (imaginary) son Sancho, Quichotte sets off on a picaresque quest across America to prove worthy of her hand, gallantly braving the tragicomic perils of an age where “Anything-Can-Happen.” Meanwhile, his creator, in a midlife crisis, has equally urgent challenges of his own.

Just as Cervantes wrote Don Quixote to satirize the culture of his time, Rushdie takes the reader on a wild ride through a country on the verge of moral and spiritual collapse. And with the kind of storytelling magic that is the hallmark of Rushdie’s work, the fully realized lives of DuChamp and Quichotte intertwine in a profoundly human quest for love and a wickedly entertaining portrait of an age in which fact is so often indiscernible from fiction.

“Lovely, unsentimental, heart-affirming… A remembrance of what holds our human lives in some equilibrium.”

The end of “Quichotte” is a meditation on language itself, beautiful in its simplicity, that pays tribute to the importance of bearing witness, of being able to tell the story against “what vanishes when everything vanishes: not only everything, but the memory of everything.”

The lovely, unsentimental, heart-affirming ending of Quichotte, that “sane man,” is the aslant answer to the question of what is real and what is unreal. A remembrance of what holds our human lives in some equilibrium — a way of feeling and a way of telling. Love and language.

“Allowing the wild adventure to overwhelm oneself is half the fun. Rushdie’s extravagant fiction is the lie that tells the truth. . . . A brilliant rendition of the cheesy, sleazy, scary pandemonium of life in modern times.”—Publishers Weekly (starred review)

“A meditation on storytelling, memory, truth, and other hallmarks of a disappearing civilization . . . Humane and humorous. Rushdie is in top form.” —Kirkus Reviews (starred review)

“Quichotte is one of the cleverest, most enjoyable metafictional capers this side of postmodernism. . . . The narration is fleet of foot, always one step ahead of the reader—somewhere between a pinball machine and a three-dimensional game of snakes and ladders. . . . This novel can fly, it can float, it’s anecdotal, effervescent, charming, and a jolly good story to boot.”—The Sunday Times

“Quichotte [is] an updating of Cervantes’s story that proves to be an equally complicated literary encounter, jumbling together a chivalric quest, a satire on Trump’s America and a whole lot of postmodern playfulness in a novel that is as sharp as a flick-knife and as clever as a barrel of monkeys. . . . This is a novel that feeds the heart while it fills the mind.”—The Times (UK)

“This latest from Rushdie is nothing but extraordinary. . . . This incisively outlandish but lyrical meditation on intolerance, TV addiction, and the opioid crisis operates on multiple planes, with razor-sharp topicality and humor, delivering a reflective examination of the plight of marginalized personhood with veritable aplomb.”—Library Journal (starred review)

“[Quichotte] is Don Quixote for our time, a smart satire of every aspect of the contemporary culture. Witty, profound, tender, this love story shows a fiction master at his brilliant best.”—The Millions

“There are majestic paragraphs composed of cascading sentences with not a beat off. Rushdie’s prose still has a flow to match his friends Martin Amis and the late Christopher Hitchens in their prime.”–Financial Times