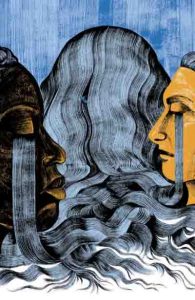 Illustration by Chloe Cushman for the New York Times

THE OLD DRIFT
By Namwali Serpell

Something is happening in African literature: The women are coming. For decades now, a river of original and important writing by female authors has been flowing out of that continent — books by writers such as Marlene van Niekerk, of whose second novel Liesl Schillinger wrote in these pages, “books like ‘Agaat’ … are the reason people read novels”; Tsitsi Dangarembga (“Nervous Conditions”); and, of course, Chimamanda Ngozi Adichie. Now that river has burst its banks and become a flood. Namwali Serpell’s extraordinary, ambitious, evocative first novel, “The Old Drift,” contributes powerfully to this new wave.

Interestingly, many of the contemporary books overlap with and even echo one another. Petina Gappah’s forthcoming novel, “Out of Darkness, Shining Light,” takes on the subject of the explorer David Livingstone and his African companions; “The Old Drift” also begins with Livingstone (but then moves on). Serpell’s novel is a multigenerational exploration of Zambia’s past, present and even its near future; another recent debut, “Harmattan Rain,” by Ayesha Harruna Attah, looks at the story of Ghana through the lives of three generations of women. And in September Maaza Mengiste’s “The Shadow King” will take on the subject of the Italian invasion of Ethiopia, moving beyond history to a kind of modern mythmaking, and looking at history primarily through the eyes of its female characters. “The Old Drift,” too, incorporates elements of fabulism into the history of Zambia, and, again, sees that history mostly through women’s eyes. Novuyo Rosa Tshuma’s “House of Stone,” published in the United States in January, has already been highly praised in The Guardian for summing up “not only … Zimbabwean history, but also all of African colonial history” — a large claim on behalf of any novel. Equally large claims have already been made for “The Old Drift,” which early reviewers have garlanded with comparisons to Toni Morrison and Gabriel García Márquez. Meanwhile, another recent novel, Jennifer Nansubuga Makumbi’s “Kintu,” has been called a Ugandan “One Hundred Years of Solitude.” Trailing clouds of glory do they come.

“The Old Drift” is a strong and confident enough piece of writing to stand on its own two feet and is perhaps not well served by being placed on the shoulders of giants. Its structure is formal, three parts containing three sections each — “The Grandmothers,” “The Mothers” and “The Children.” Each of the nine sections is centered on one dominant character, all women in the first two parts, and, in the final section, two young men and one young woman. In between are to be found short, italicized sections narrated by an unnamed “we,” which work as a sort of Greek-chorus commentary on the action.

The novel tells the intertwined stories of three families — one white, one black and one the product of an interracial marriage — making jumps in time to tell the various dynastic tales until the three clans merge into one near the end. At first glance this may strike the reader as overly schematic. That it doesn’t read that way is a tribute to the energy with which the stories are told, and the vivid detail in which the world of the book is created.

Historical figures mingle with fictional ones in these family sagas. Two years ago, in The New Yorker, Serpell wrote a lengthy nonfictional account of one of these figures, Edward Mukuka Nkoloso, a schoolteacher, revolutionary and “Afronaut,” the head of the absurd Zambian Space Program, which trained young people to go to the moon “by spinning them around a tree in an oil drum and teaching them to walk on their hands.” Nkoloso and the Afronauts play important parts in “The Old Drift.” In addition, two of the patriarchs of her fictional dynasties are real people: the hotelier Pierre or Pietro Gavuzzi, who ran the Victoria Falls Hotel at the early settlement near the waterfall known as the Old Drift, and the colonial-era traveler Percy M. Clark, the author of a guidebook to the Falls written circa 1910. Percy is allowed to tell his story and the story of the Old Drift’s founding in the first person; after that, the third person, and fiction, take over.

The novel’s greatest strength lies in its creation of three unforgettable female characters. Agnes, the white upper-class English girl (and granddaughter of Percy Clark), loses her sight and falls in love with a black man without knowing he’s black, and, expelled from her family, follows him to Africa to become a gentle, grand presence throughout the book. Matha, one of Nkoloso’s Afronauts who, following a heartbreak, is afflicted by endless, unstoppable tears for the rest of her life, becomes known as the “crying woman.” Most striking of all is Sibilla, an illegitimate offshoot of the Gavuzzi family, who suffers from extreme hirsutism, every part of her body sprouting luxuriant hair (if one wanted to be unkind, one might think of Cousin Itt). Sibilla and her hair — weaving, dancing, whirling, whitening into old age — dominate the novel and give it its defining imagery, its infinitely variable leitmotif. Hair is everywhere: Trails of hair are left so that lovers can find each other, hair salons are opened and form the backdrop to crucial scenes, hair is shaven off the heads of women mourners. “What are you made of?” one character demands, and the answer is one that the novel itself might give: “Hair.”

Around these three iconic characters is woven a complex narrative of the founding and growth of Zambia, and, in the book’s second half, of the arrival of and battle against what is referred to only as “The Virus” — the H.I.V./AIDS pandemic, which, by the year 2000, affected more than 15 percent of the Zambian population, more than half of the afflicted being women. The book’s three dynasties are not spared, and the emotional devastation wrought by illness is keenly felt in these pages.

Which leads me back to the Greek chorus, the anonymous “we.” It transpires that “we” are mosquitoes, commenting on what the human beings are getting up to. For much of the book I wasn’t sure about these buzzy passages, especially in the Virus sections, when the bloodsucking Anopheles gambiae sing “Blood, blood, glorious blood!” Parodying the old Hippopotamus Song about glorious mud, they run the risk of confusing the reader (since mosquitoes are unable to carry The Virus or transmit it to human beings). However, in the final section of the book, when Serpell daringly pushes past the present day to take us into a technologically advanced future and a climax that combines revolution and catastrophe, the mosquito trope is cleverly transformed and begins to make sense.

“The Old Drift” is an impressive book, ranging skillfully between historical and science fiction, shifting gears between political argument, psychological realism and rich fabulism. It isn’t perfect. It’s long, and there are longueurs. Not all of the nine leading characters are as interesting as Agnes, Matha and Sibilla. Sometimes the history, the medical information and the science are laid on with too heavy a hand. But these imperfections should not detract from what is, by any standard, a dazzling debut, establishing Namwali Serpell as a writer on the world stage.

Quichotte LIVE from the NYPL: Salman Rushdie with Paul Holdengräber: The Golden House